All-Pro running back Adrian Peterson‘s appeal of a league suspension for a violation of the NFL’s personal conduct policy has been denied, the league announced Friday.

Peterson’s appeal was heard by former NFL executive Harold Henderson last week in Washington, D.C. Henderson was appointed by commissioner Roger Goodell as arbitrator to hear the sides’ cases and issue a ruling.

In upholding the NFL’s initial ruling, Henderson concluded that Peterson “has not demonstrated that the process and procedures surrounding his discipline were not fair and consistent.”

Wrote Henderson: “He was afforded all the protections and rights to which he is entitled, and I find no basis to vacate or reduce the discipline.”

Peterson, in an hour-long phone interview with ESPN.com’s Ben Goessling on Friday night, questioned the ruling.

“I feel like they’re handling the situation absolutely wrong,” he said. “I think I’ve been made an example out of. It kind of baffles me how — I have nothing but love for Ray Rice, I’m happy he has the chance to play. But it’s like, how did Ray Rice get reinstated before me, a team has a chance to pick him up, but I don’t have the opportunity to come back until April. When has that happened in any other case in the NFL, ever?”

Peterson said he will appeal the decision in federal court. 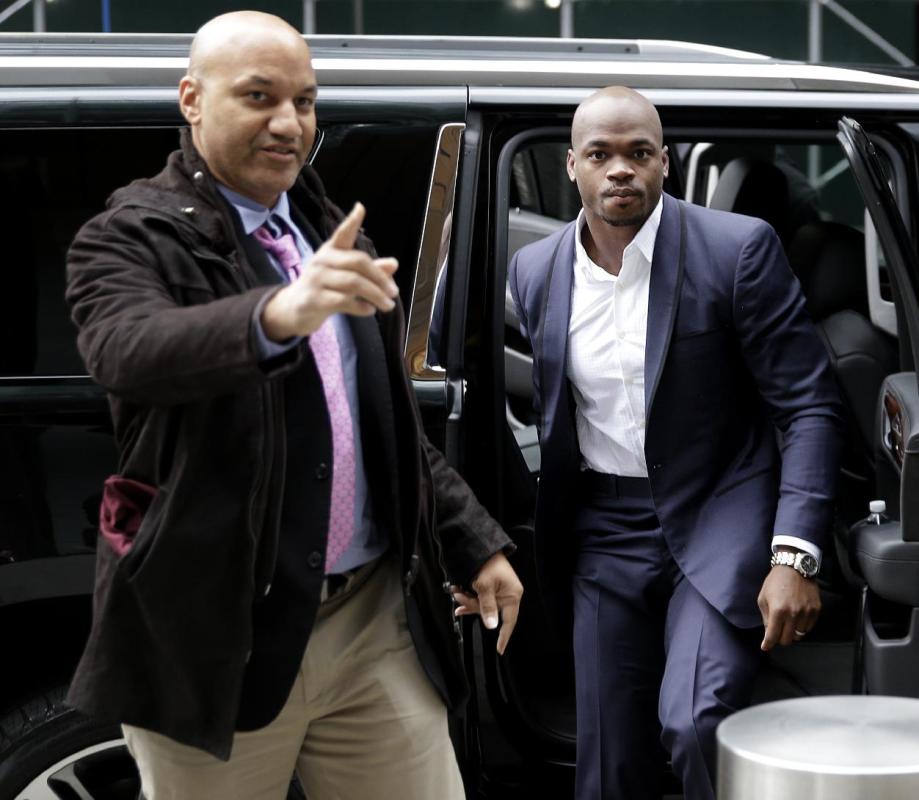 “I don’t really know,” he said when asked whether he thought the decision to pursue legal action would delay his reinstatement. “That’s something I have to sit back and talk to my team about. I haven’t talked to anyone today. To this point, any type of process with the NFL is not the way to go. It’s a business; the outcome is going to be in their favor no matter what. Did they appoint Harold Henderson to Ray Rice’s case? No. They knew the situation and the facts about that case and what was going to come out. They clearly wanted to get [an arbitrator]that would rule in their favor.”

The players’ union reacted swiftly to the ruling.

“The NFLPA expected this outcome, given the hearing officer’s relationship and financial ties to the NFL,” the union’s statement read. “The decision itself ignores the facts, the evidence and the collective bargaining agreement. This decision also represents the NFL’s repeated failure to adhere to due process and confirms its inconsistent treatment of players. Our union is considering immediate legal remedies.”

Peterson, the 2012 NFL MVP, hasn’t played for the Minnesota Vikings since Week 1 after he was charged with child abuse in Texas. He was placed on paid leave while the legal process played out, and he pleaded no contest Nov. 4 to misdemeanor reckless assault for injuring his 4-year-old son with a wooden switch. He avoided jail time by reaching the plea deal.

Key Dates in Peterson Case
Sept. 12: Peterson indicted for reckless or negligent injury to a child in Montgomery County, Texas
Nov. 4: Peterson pleaded no contest to misdemeanor reckless assault for injuring his 4-year-old son with a wooden switch
Nov. 18: Peterson was suspended without pay for at least the rest of the season by commissioner Roger Goodell
Dec. 12: Peterson’s appeal of the suspension denied
April 15, 2015: First date Peterson can apply for reinstatement to the NFL

On Nov. 18, Peterson was suspended without pay by Goodell for at least the rest of the season. He will remain suspended and won’t be considered for reinstatement before April 15, though he will get to keep the money accrued while on the exempt list.

However, Peterson will not serve a three-game suspension at the start of the 2015 season as was initially reported. Rather, he will be charged three additional game checks on this season’s salary for a total of six games, according to ESPN’s Chris Mortensen. Peterson will have the choice of paying the salary back now, or having his wages garnished in 2015 if he plays. The docked game checks are based on this year’s salary of $11.75 million and amount to $4.15 million (game payments are based on 17 weeks, not 16 games).

“The facts in this appeal are uncontested,” Henderson wrote. “The player entered a plea which effectively admitted guilt to a criminal charge of child abuse after inflicting serious injuries to his four-year old son in the course of administering discipline. No direct evidence of the beating was entered in the record here, but numerous court documents, investigative reports, photographs and news reports, all accepted into evidence without objection, make it clear that Mr. Peterson’s conduct was egregious and aggravated as those terms are used in the Policy, and merits substantial discipline.

“His public comments do not reflect remorse or appreciation for the seriousness of his actions and their impact on his family, community, fans and the NFL, although at the close of the hearing he said he has learned from his mistake, he regrets that it happened and it will never happen again. I reject the argument that placement in Commissioner Exempt status is discipline.”

At the crux of the NFLPA’s argument for reinstatement was what NFL executive vice president for football operations Troy Vincent told Peterson last month when the dispute was at its height. According to ESPN and media reports, Vincent told Peterson he would receive a two-game ban if he attended a hearing on Nov. 14 with Goodell.

Peterson declined to meet that day with Goodell, citing uncertainty about the NFL’s intent to question him. Goodell then announced on Nov. 18 that Peterson would be suspended for the six games that remained for the Vikings at the time and not be considered for reinstatement until April.

A recording and a transcript of what Vincent told Peterson was presented by the NFLPA to Henderson, who oversaw a hearing on Dec. 2. Peterson attended that and listened via telephone as the hearing continued Dec. 4, when Vincent was questioned.

The union and league have been sniping at each other over the personal conduct policy since the case of Rice, the former Baltimore Ravens running back, last summer eventually prompted Goodell to upgrade the penalty for a first offense of assault, battery or domestic violence to a six-game suspension. After first suspending Rice for two games, Goodell suspended Rice indefinitely amid a national furor over his initial leniency.

The outrage compelled the league to re-examine its conduct policy, and on Thursday, Goodell announced unanimously approved changes. A more extensive list of prohibited conduct will be included in the policy, as well as specific criteria for paid leave for anyone charged with a violent crime. Goodell will retain authority to rule on appeals, while a special counsel for investigations and conduct will oversee initial discipline, the commissioner said.