The show — and our hearts — will go on!Céline Dion got emotional when her 15-year-old son, René-Charles, presented her with the ICON Award for lifetime achievement at the 2016 Billboard Music Awards in Las Vegas on Sunday, May 22. 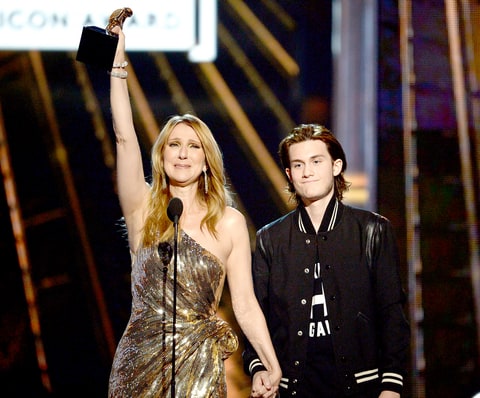 After delivering a powerful performance of Queen’s “The Show Must Go On,” the iconic French-Canadian singer, 48, cried as she hugged her son and gave her acceptance speech, which addressed the difficult last few months. “I want to be so strong for my family and my kids, and I didn’t expect that,” she said of her tears. “You make me so happy. Thank you,” she told her oldest son, who looked so grown-up. The “My Heart Will Go On” singer even asked René-Charles to stay by her side as she went through the rest of her acknowledgements.

“So many people have helped me get where I am today,” she said before thanking numerous music execs. She saved the best for last and thanked her mom, her children and “most importantly my beloved husband who I know will continue to watch over me from up above.”

Her cover of Queen’s 1991 track seemed to be a fitting tribute to her late husband,René Angélil, who passed away from throat cancer at age 73 in January. Her brother,Daniel Dion, also died from cancer in the same week. Fans got a preview of the song on Friday, May 20, when the singer released it as a single, but the live show blew it away. The chart-topping songstress, who wore a sparkly gown and showed off her legs with a high slit, even got a standing ovation for the stunning performance.

“She personally chose to perform ‘The Show Must Go On’ as her ICON performance on the Billboard Music Awards,” the awards show’s executive producer Mark Bracco said in a statement. “I think at this moment in her life, the song has many meanings and it’s an amazing choice.”

Keeping with her late husband’s wishes, Dion returned to the stage at her Vegas residency about six weeks after his passing. After the Billboard Music Awards, she will tour Europe to promote her new single and upcoming album.

Dion and Angélil were married for 21 years and also share 5-year-old twin sons Nelson and Eddy.