A chartered plane carrying 81 people, including members of a Brazilian soccer team that had made a stunning climb up the ranks at home, crashed on the outskirts of Medellín, Colombia, killing nearly everyone onboard, the authorities said early Tuesday.

Colombia’s civilian aviation authority said that six people had survived the crash — three players, two crew members and a journalist who was accompanying the team.

Members of the Chapecoense soccer team were traveling from Bolivia to play in the final of the Copa Sudamericana tournament when the plane crashed around 10 p.m. on Monday.

The aircraft was carrying 72 passengers and nine crew members, according to the Medellín airport. Search and rescue efforts were hampered by low visibility and difficulty in reaching the site. 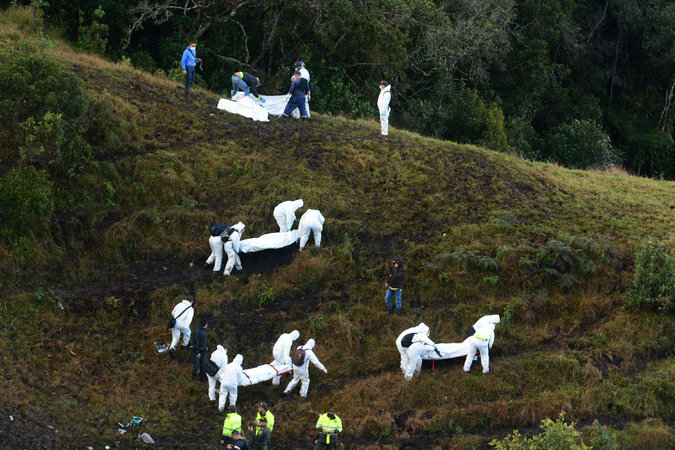 Rescue workers removing bodies of victims at the site of a plane crash on the outskirts of Medellín, Colombia, on Tuesday. CreditLuis Benavides/Associated Press

The authorities said the plane had reported electrical problems as it flew near the towns of La Ceja and La Unión, in mountainous stretches around Medellín.

The crash crushed the hopes of one of the most impressive success stories in Brazilian soccer. In a national soccer league plagued by corruption scandals, mismanagement and lingering fury over the debacle of the national team’s loss to Germany in the 2014 World Cup in Brazil, Chapecoense managed to achieve success on the field and financial stability.

It emerged as a scrappy upstart, challenging giants like Flamengo, Corinthians and other storied Brazilian clubs. In southern Brazil, the team was the pride of Chapecó, a staid city of 210,000 known for its food processing plants and other agribusiness ventures.

“This is a relatively small city, so everyone knows somebody who was on the plane,” said Roberto Panarotta, 44, a professor of media studies in Chapecó. He added that he lost a childhood friend in the crash, a member of the coaching staff.

“Everybody is shocked, and nobody really knows how to react,” he said. “Nothing like this has ever happened here.”

At least 21 journalists were reported to be onboard the plane, including reporters from Fox Latin America, the Globo television network and news organizations from southern Brazil. All but one died, the authorities said.

In a televised address, President Juan Manuel Santos of Colombia called the crash “a tragedy that has the whole region in mourning.” He said that of the six survivors, two were in critical condition, and that he had spoken with President Michel Temer of Brazil, offering any assistance needed.

The Colombian station Blu Radio, citing an interview it conducted with Alfredo Bocanegra, Colombia’s civil aviation director, said the plane had declared an emergency as it approached Medellín. The plane was given priority to land before air traffic controllers lost contact with it.

Federico Gutiérrez, the mayor of Medellín, told Blu Radio that “emergency support, with firefighters, ambulances and the hospital network,” had been activated.

Members of Chapecoense were flying to Colombia for the first match of a two-leg final in the Copa Sudamericana, a second-tier championship for South American clubs. That match, against the Colombian team Atlético Nacional, was scheduled for Wednesday in Medellín. Chapecoense beat San Lorenzo — the Argentine club that counts Pope Francis as a fan — in the semifinals, and clubs like Atlético Junior of Colombia and Independiente of Argentina along the way.

The South American Football Confederation said that it had suspended the Copa Sudamericana and that the group’s president was heading to Medellín.

As Brazilians awoke on Tuesday to reports about the crash, they expressed anguish, and Mr. Temer said on Twitterthat there would be a three-day mourning period.

“Before boarding, they said they were seeking to turn their dream into reality,” Plínio David de Nes Filho, chairman of the board overseeing the Chapecoense club, told reporters. “This morning, that dream is over.”

The mayor of Chapecó said he and other officials narrowly missed being on the plane. .

“We were supposed to be on that flight,” said the mayor, Luciano Buligon, adding that he and others had opted instead to take a commercial flight.

Others expressed relief about reports of survivors, including three players. “Thank God Alan is in the hospital, in stable condition,” Moa Ruschel, the wife of Alan Ruschel, a defender for Chapecoense who was among the survivors, said in a post on Instagram. “We are praying for everyone who wasn’t saved.”

Chapecoense, founded in 1973, returned to the top tier of Brazilian soccer in 2014 after a 35-year absence. The two-legged fixture with Atlético Nacional in the final of the Copa Sudamericana had been described as the biggest in the team’s history.

Chapecoense’s rise from the country’s fourth division — where it played as recently as 2009 — has been described as a “Cinderella” story.

The club has established a reputation for long-term thinking and financial prudence, a rarity in the chaotic world of Brazilian soccer, and its progress to the final of the Copa Sudamericana put it in position to become the first team from the country to contest a continental trophy since 2013.

Conmebol, the governing body of South American soccer, issued a statement to say that all of the federation’s activities would be suspended until further notice. A number of teams in Brazil canceled events; Barcelona said it would hold a moment of silence before training on Tuesday; and clubs from across the world, including Manchester City and AC Milan, shared their condolences.

Romário de Souza Faria, a former striker for the Brazilian national team, expressed his “solidarity with the friends and families of the players, journalists, technical staff and flight crew” who died in the crash.

“God please help all those who were onboard the plane,” Alexandre Pato, who plays in Spain and has been a member of Brazil’s national team, wrote on Twitter.

Share
Previous article « [Video] Who is Joseline’s Baby Father – Stevie J or Young Dro?
Next article [Review] Business by Bossing Up and Kingdom Building with Khalilah T. Olokunola Gets Two Thumbs Up and 5 Stars »