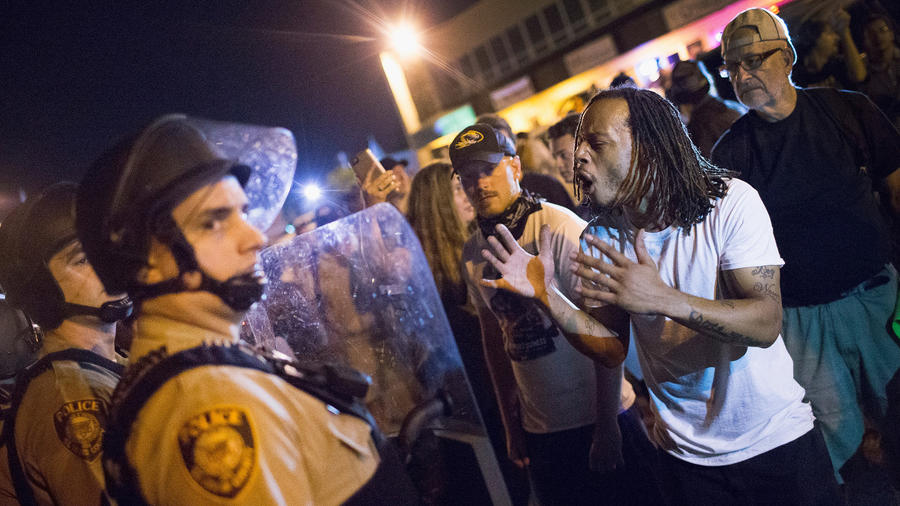 Dontey Carter stood at the head of a column of protesters screaming at police on West Florissant Avenue, the scene illuminated by street lamps, photographers’ flashes and the fluttering spotlight of a surveillance helicopter.

“Nobody going home tonight,” Carter, 24, shouted at the line of 40 helmeted, baton-wielding officers. He raised his arms in the “hands up, don’t shoot” pose that has become the symbol of the protests that erupted after Michael Brown’s death last year. Carter approached the officers, and demonstrators behind him surged forward.

Into the melee dived a bald man in a neon orange shirt, intercepting Carter as he approached the police line.

Last night we counted five people who wanted to die, who wanted to kill, that we saved from themselves.
– Rev. Rob White, Clergy United
“Not here, not here, not now,” the man shout-whispered into Carter’s ear over the thrum of helicopter blades and a growing chorus of angry taunts from protesters. Carter backed away, and so did the rest of the crowd.

The scene Monday night has become familiar here since the shooting of Brown, an unarmed black 18-year-old killed by a white police officer on Aug. 9, 2014.

But one year after Brown’s death, the Rev. Rob White, the man in the orange T-shirt, has given up on the idea of a single noble cause uniting thousands of people. Instead, he’s simply trying to save people from themselves. When asked whether he still believed in uniting the protest group, he too put his hands up.

“This is the only time I say, ‘Hands up,’ because I have thrown my hands up trying,” White said.

White is in Ferguson as part of Clergy United, a group of religious leaders who have attempted, with some success, to keep the peace on the front lines of protesters facing off with police.

The Ferguson protest movement isn’t a united front, but a loosely woven coalition united under the catchall banner of protesting police treatment of African Americans, usually in cities with a white power structure.

That has drawn hundreds of people to the street, and they aren’t all interested in peaceful protest.

To begin with, everyone is called a “protester,” but to White, the word has lost all meaning. People are gathered in one place; that much is certain. But “you can’t define a protest by one single person,” he said.

So referring to people who shoot at one another during protests as “protesters,” he said, is as useful as describing an assailant as a biped Homo sapiens — it conveys nothing about the motivations of the protest or the assault.

“Those of us trying to find unity end up hitting these walls,” he said.

It has been documented and a black witness testified Michael Brown NEVER had his hands up and was struggling to get police officer gun. The guy who was shot in Ferguson this week now truth be told was a gangster with a gun. NBC showing him on video with gun, media take out has pics of his…

The work of bringing people together was a different problem for his parents’ generation in the 1960s, he said, when there was organization and leadership. Now, he said, it’s as if there are sheep following every loud voice, with no thought or direction.

Does it ever feel as if the sheep are walking, repeatedly, into an electric fence?

Instead of worrying about what he could have done better, White counts the people he and Clergy United save each night.

The protests here have the staged feel of a reenactment, a familiar but forced affair that retains much of the same cast as last year but none of the immediacy, when questions about the shooter and the shooting were rising daily and people were demanding answers.

Now the answers are there. The shooter was Ferguson Police Officer Darren Wilson. A grand jury would decline to charge him in the death of Brown, who was shot at least six times. It is unclear whether Brown’s hands were up when he was shot.
Even the fallout from those revelations has receded: Wilson left the Ferguson police force and went into hiding. Rioters burned a police car. Ferguson has a new interim police chief and three black members on the six-member City Council.

And more young black men around the country have died at the hands of white police officers.

On Tuesday afternoon, after a prayer, White prepared to return to West Florissant Avenue in Ferguson, the site of protests since last August.

He didn’t expect to change minds or forestall violence when violence is the intent. But, he said, if he could help break the cycle of protesters challenging police and police reacting with violence, even for one more night, he would consider it a gift from God.

“This is the calling God brought us to,” White said. “There’s a lot of hurt in this city.”