(Saturday August 1st, 2015) – Morehouse Scholar Da’ Shaun Harrison will gather with citizens of Wilmington, NC and surrounding areas starting at 3:00 p.m. on the side of City Hall for the first My Community Matters Rally.  Attendees will hear speeches from influential leaders of the community, poetry and other spoken word performances from various artist, and music provided by Host DJ Bigg B of Coast 97.3 and Core DJs.  Guest will also have a chance to sign up to become a member of NAACP, register to vote, and let their voice be heard as we discuss current issues in the community.. 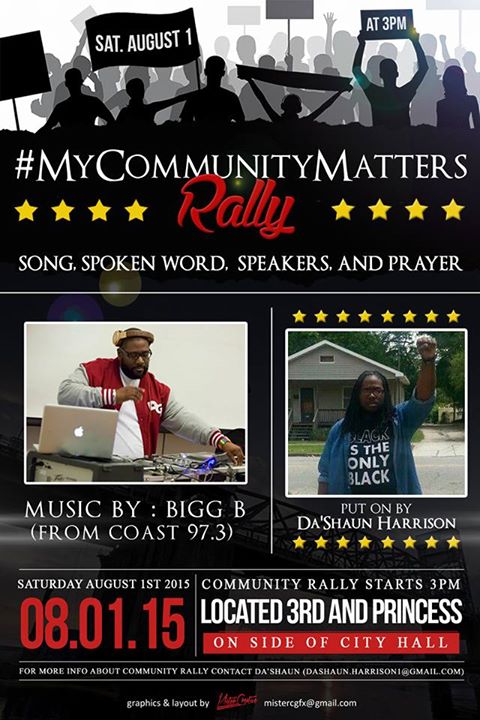 Award-winning scholar Da’Shaun Harrison was born and raised in Wilmington, NC.  It’s safe to say that Da’Shaun was very involved with his school, having recently graduated from Hoggard High School in 2014 with a 4.2 GPA.  But not only did Da’Shaun excel inside the classroom, but he was also very involved outside the classroom becoming the First African American Male Drum Major to ever walk the campus.  Not to mention being a survivor of atrial fibrillation, it seems no matter what the test is Da’Shaun always finds a way to pass with flying colors.  Now a man of Morehouse College, a Historically Black College & University in Atlanta, GA, Da’Shaun is a member of the NAACP, and other organizations on campus working to make the world a better place.

Bigg B was raised in Wilmington, NC on the Northside of the city. Bigg B founded Urban Promotions, an organization for teens to voice their concerns and opinions to community leaders. Bigg B travels the east coast speaking, motivating and presenting workshops for youth and adults on HIP HOP 101, History, and Diversity in the Workplace.

Currently Bigg B is the Program Director and afternoon on-air personality for WMNX-COAST 97.3 and a member of the largest DJ Organization in the country…The Core Djs in which he is the entertainment reporter for Core DJ Radio. Also, he was named 2008-2009 North Carolina Alumni Brother of the Year for Alpha Phi Alpha Fraternity, a Core DJ, 2009 Southeastern Music Entertainment (SMES) Program Director of the Year and recently nominated for the North Carolina Music Awards Radio Personality of the Year.

Share
Previous article « Female Empowerment Movement Growing through Efforts of Shareese Simmons
Next article Singer Chris Brown Cries out to God in Instagram Post, Says He Is Sick of The Devil ‘Ruining’ His Life »