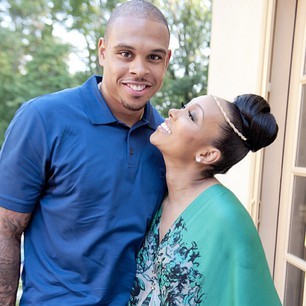 Singer Monica and her husband, NBA player Shannon Brown, are the latest celebrities to get caught in an alleged cheating scandal. And now Brown has broken his silence on the matter.

He took to Instagram and interestingly enough seemed to speak on the headlines after he got into a motorcycle crash. He shared a photo of the totaled bike and added a cryptic caption.

“I survived this, so you already know I could give two [cares]about the lies they tell or the people that believe them. I got my own back. #InCaseYouWasWondering”

It’s not clear if his wife believes the reports that he cheated with a woman he met via Instagram, but she seemed to confirm there was trouble in their relationship after she was spotted not wearing her wedding ring over the weekend. She shared a clip of a concert in Raleigh in which she wasn’t wearing the band but told her fans she, “needed the love more than ever.” She added, “SO GONE… Feeling it.” While Brown has said he is covering his “own back,” Monica seems to be focused on the children. She had two boys from a previous relationship and she and Brown have a daughter together. She posted a video of a clip of the children playing and added the caption, “Center of my Joy… In life tests are sure to come & because of my faith & belief that God is control I don’t run to talk about my problems because I’m too busy thanking him for the good he’s doing in my life… I’m not fake I just refuse to give the devil Glory that only God should have!!”