Presidential  Styles had the honor of speaking with Love And Hip-Hop’s Hollywood. Morgan Hardman, who has been in the Industry since 2006 as an assistant for videos and productions.

She recently became a manager for Moniece of Love And Hip-Hop Hollywood. Morgan goes into explaining how this career chose her. She originally wanted to be a nurse, but decided that she wanted to go into the Army. Morgan, says Ray J talked her out of going into the Army and hired her as his personal assistant. She expressed her love to just work and stated that I feel like a bum if I’m not doing something. Also, she goes to state, “even if I worked at McDonald’s, I would be the best worker because I just love to work.” 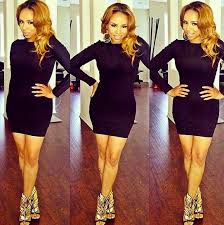 The biggest challenge she has to deal with as an assistant, is that she has to take the fall when things don’t go as planned, or when something just doesn’t work out. She named two motivators in her career as being the best experiences yet. The first one was a Spa Day event where 25 women were chosen for a makeover. She goes into detail about how she felt being apart of this wonderful event and how she could relate to so many of the women there and the hardships that they were going through. Next was The Anti- Bullying Cam – Pane that she was apart of. She was touched by one of the children’s  parents that reached out to her. The parent told her that she had saved her daughter’s life because nothing they told her was making a difference. Morgan helped turn this young lady’s life around. Morgan speaks so passionate about everything that she is doing, but most passionate about the anti-bullying. She is going to make a difference through her new projects where she will be touring from city to city with her team. She is working on a women support group inspiring, motivating, boosting self-esteem and self- confidence. These are her missions.

Also, she has a ” Work Hard Work Shop,” that is working through different temp. agencies. Morgan will be training assistances and referring them to work with doctors, lawyers, etc. This will be a time for you to show up and show out as well as work hard! She’s going to show that hard work really pays off.

Morgan says, “No matter what career path you choose, never give up and believe in yourself no matter what someone thinks of you and there is no limit to where you can go.”

Her biggest motivation is her 11 year old son La’corey Johnson. Morgan talks non-stop about her son. He has a strong passion for stray animals and how he wants to bring all of them home. She goes on to tell us about the other day, they were going into the store and he wanted her to buy a stray animal some food, which she did. He then looked up at her and said, “God loves you mommy.” Morgan’s  “Boo”,who will remain nameless is another positive influence . Morgan says, “I never put my personal life about who I’m dating in the media.”  Morgan goes on to say, ” My Boo has been in my life for a very long time trying to get at me and has always been there for me as my friend and we became a couple right after the show, he is my support system.”

Do you think that your relationship could be mended between you and Ray  J? Morgan answered by saying, “no because if you can send somebody at me to fight and fire me, those are two things that could effect my life and my kid.” There is no respect there, but she will always love him. She says, “the whole situation has affected her son’s life as well because he has known Ray J as an uncle that is no longer coming around, and still to this day, he asks about his Uncle Ray.

We asked her how is life after Love And Hip-Hop and did it have a negative effect on her life? Morgan says that it’s whatever you wanna make it such as, if you want it to be messy, ratchet and filled with drama then that’s what it’ll be, but if you want it to be professional and help others and drama less its just what you make of it. She says, “cameras on or off…Morgan is Morgan, Real Recognize Real.”

You can follow Morgan on Twitter Instagram & Facebook @morganhardman and www.MorganHardman.com
Be on the look out…. she could be coming to a city near you.
Share
Previous article « Viral: Cops Pull Over Drivers To Give Them Holiday Gifts ….Christmas Surprise Traffic Stop with Lowell Police
Next article Comedy Royalty Comes Back To Queens For A Major Standup Event »