Press them just a bit and they’ll talk about world peace and the need to feed starving children. 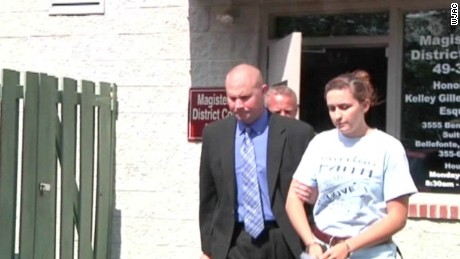 Authorities accuse Brandi Lee Weaver-Gates, Miss Pennsylvania U.S. International, of casting aside those attributes and faking cancer in an elaborate scheme that raised thousands of dollars.

Weaver-Gates led everyone to believe she had been diagnosed with chronic lymphocytic leukemia in March 2013.

In the years since, she took part in fundraisers to pay for her treatment. Police told CNN affiliate WJAC the most recent event was held in April and raised $14,000.

A police investigation found no evidence that Weaver-Gates had ever been under a doctor’s care for cancer.

State Police Trooper Thomas Stock called her efforts to make people believe she had cancer “an elaborate scheme,” telling WJAC that Weaver-Gates would have relatives drive her to Johns Hopkins Medicine in Baltimore.

They would wait in the lobby for hours for her return, while she went to another part of the hospital.

An anonymous letter to police tipped them off to the scheme. “When confronted with what the investigation revealed, the accused advised that she did not want to incriminate herself and invoked her right to an attorney,” police said in a release.

Weaver-Gates is being held in the Centre County Correctional Facility after she was charged with felony counts of theft by deception and receiving stolen property.

She is due in court next week.

The pageant is taking the news seriously, too, pulling her Miss Pennsylvania U.S. International title.

“When you deceive the public and take people’s money that is under the pretense of fraud, we will not tolerate those actions,” said a statement from Butler’s Beauties, pageant organizers.

“Ms. Weaver-Gates … will be required to return her crown and sash upon her release from being detained.”