Nida, who appears on the reality TV series with Parks, was arrested in January and pleaded guilty in May to charges in a fraud scheme that federal prosecutors say stole millions of dollars from at least 50 people over four years.

A hearing on July 17 will determine how much restitution Nida must pay to his victims. 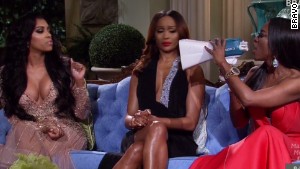 This ‘Housewives’ fight leads to arrest

Nida, 35, must serve five years under parole supervision after he completes his eight years in a federal prison, U.S. District Court Judge Charles A. Pannell, Jr. ordered during sentencing Tuesday.

It will be the second prison stint for Nida, who previously served five years in a federal prison for auto title fraud before marrying Parks in 2009. 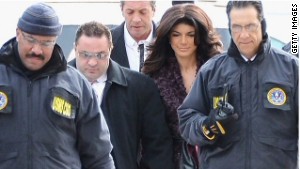 Nida created two fake collection companies to gather personal information used to steal victims’ identities, U.S. Attorney Sally Quillian Yates said after his sentencing in Atlanta. He used the information to get fraudulent auto loans in the names of his victims, according to the criminal complaint.

He was busted after a year-long investigation by the U.S. Secret Service.

“Today’s sentencing exemplifies impartial justice regardless of economic class or perceived celebrity status,” U.S. Secret Service Special Agent Reginald Moore said.  “Nida’s sentence should be an eye-opener for other like-minded criminals who scheme to steal victims’ identities, defraud them and ignore the consequences of their actions.”

The break in the case came in September, when federal investigators arrested Gayla St. Julein, a woman who “described herself as Nida’s ‘right hand b****’ in executing the legwork of his fraud schemes,” the complaint said.

St. Julien, who previously served prison time for identity theft, told agents that Nida “only paid her ‘scraps'” for her work, compared to the amount of money he made from the fraud schemes,” the filing said.

She turned on him and agreed to let agents record their phone calls, it said.

Along with the fraudulent auto loan checks, Nida stole U.S. Treasury checks, “retirement checks issued to Delta Airlines employees, and checks in the names of real people that were owed unclaimed property from various state and federal government agencies,” the complaint said.

Agents recorded phone calls St. Julien made to Nida during which he discussed details of pending fraudulent auto loans and “details of future auto loan checks that he was expecting to receive any day now from in the mail,” the affidavit said.