Presidential Style was in attendance this year on Saturday September 17th  Downtown Wilmington NC at The Union Station. We caught up with amazing Schelle H Purcell and she gave us an interview.

Schelle has produced 7 stage plays, 5 short films and Two Wrongs is her first feature film. Three of her projects were selected for the Wilmington NC Black Film Festival, The Vows, Five Little Girls and Two Wrongs. This was her first time in Wilmington as well as her first time submitting her work in any film festival. Schelle goes on to tell us this was a really big deal to her because Ava DuVernay is someone she looks up to and DuVernay made her start to success when she was honored here. She felt honored to be among all the great filmmakes that were apart of the festival. This was a big confidence booster because three of Schelle’s project were selected and she is even more inspired to get back in the lab to work on some new and up coming projects. She is originally from Mississippi she moved to Raleigh NC where she lived for ten years working at Lenovo. She felt trapped yet inspired to follow her dreams, so she packed up and moved Atlanta GA in pursuit of happiness. She met Nikkita Donyal Johnson who is a featured actress in her movie 2 Wrongs who then introduced her to Daniel Dickey. Schelle gives The Resource Guild credit for helping her brand herself with the success of her feature red carpet event in Atlanta.

In April, Schelle Purcell, Olrick Johnson & The Two Wrongs Cast celebrated the premiere of Preeminent Film Group and HWF Productions first feature film “Two Wrongs” with a red carpet premiere with all of their close family, friends and influencers in the film industry at the 444 Theatre. Guest checked in and were guided to the live Jazz reception featuring saxophonist Trey Daniels in a vibrant atmosphere where they enjoyed complimentary hors’ d’ouevres including: Fried Shrimp & Grits Balls, BBQ Jerk Rum Chicken Skewers, Tuscan Greek Salad and more, courtesy of Nikki Can Cook, Guest also enjoyed complimentary specialty cocktails courtesy of Martell Cognac & Seagrams Gin.  At the conclusion of the reception, attendees lined up to take memorable red carpet photos with the cast, crew, friends and family.  Before entering the 444 Theatre, attendees were treated to specialty popcorn flavors including: Cheddar, Garlic Parmesan, Cookies and Cream and more provided by The Gourmet Popcorn Bar. The film was introduced and the audience experienced a thought provoking film filled with hysterical laughter, love and the power of forgiveness and received a resounding standing ovation by the packed house for the premiere. Immediately following the film, the entire “Two Wrongs” cast and Preeminent Film Group producers came on stage for a special Q&A with the audience. 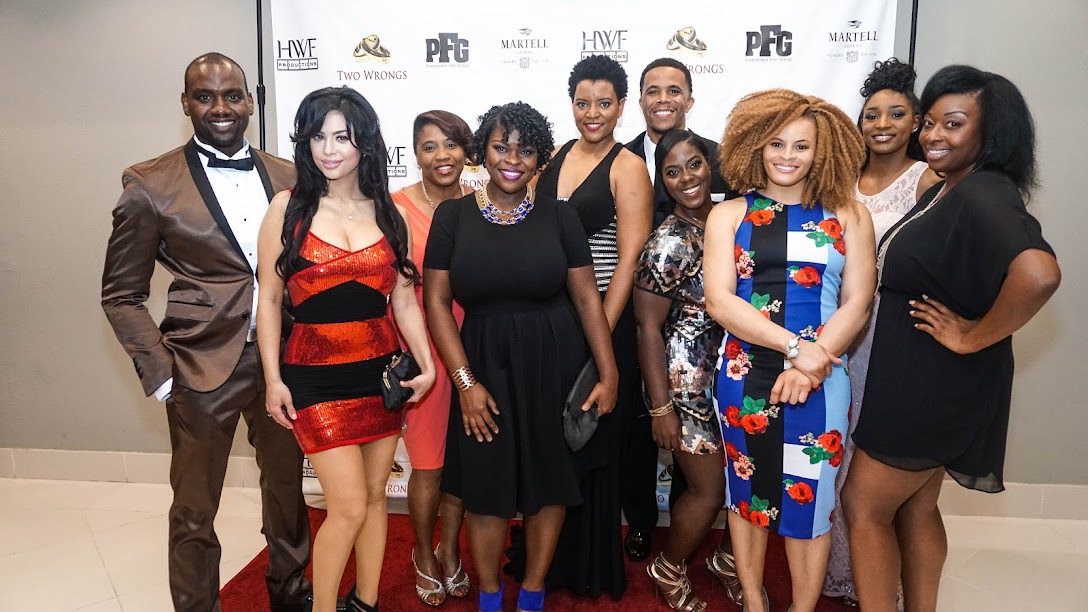 “Two Wrongs” Synopsis: We all know the cliché “Two wrongs don’t make it right”. But when lies, deception, love and lust mingle; two wrongs may not make it right but the cost of making it even was a debt Kevin & Liberty Dallas didn’t know they would have to pay.

For more information on “Two Wrongs” and other projects by Schelle Purcell and HWF Productions visit: www.HWFProductions.com

In the future, Schelle Purcell wants her production company to be the “go to” production company for Freelance Writing  to Producing. She wants to be that one stop shop for theatre, television, film production. With her inviting personality she wants to be able connect people to different networks. She’s always networking to help ours in the mist of her producing own films. Shes doesn’t mind the sacrifice becomes she sees the bigger picture.