Shaune Walters, left to right, Shawn Elliott Richardson and Cassandra Ottley link arms as they listen to NAACP North Carolina chapter president speak at the end of a march to honor the memory of Lennon Lacy and to bring awareness to the case, in Bladenboro, N.C. BLADENBORO, N.C. — The hanging death of a 17-year-old black male here has stirred up old fears and fresh concern as residents raise doubts about whether authorities, who called the teen’s death a suicide, adequately investigated the possibility this might have been, in fact, a lynching.

On Saturday, protesters marched through the heart of town to call for a thorough examination of what happened to Lennon Lacy, who was found hanging by two belts from a playground swing set near his home Aug. 29. The case had appeared to stall for months, but in recent days the demand for answers and suspicions that local authorities allowed the case to founder have grown. It was announced Friday that the FBI would look into the case. 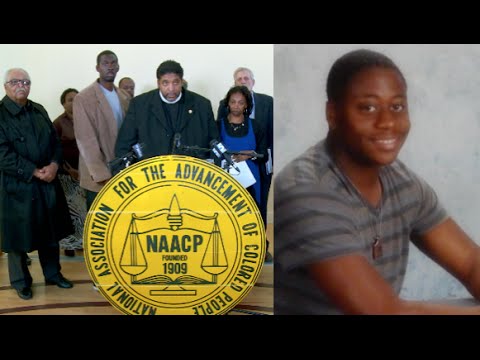 “We know it was a hanging,” NAACP state chapter president the Rev. William Barber II said before Saturday’s march. “But the question is, ‘Was it self-inflicted? Was it a staged hanging? Or was it a hanging or lynching homicide?’ ”